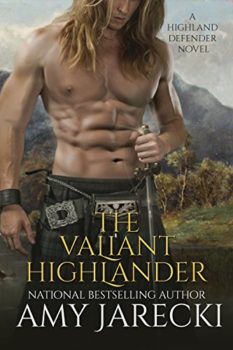 The Valiant Highlander
by Amy Jarecki

When Sir Donald MacDonald, Baronet of Sleat meets
trews-wearing, musket-wielding, redheaded Mary of Castleton,
he’s completely flummoxed. Such a woman would never
fit in to his aristocratic way of life. And Mary wants
nothing to do with her father’s wishes for her
betrothal. Indeed, the two agree on one thing: They are
completely, utterly and inarguably incompatible.

But when Mary is abducted from Dunscaith Castle and spirited
away in Sir Donald’s sea galley, the baronet has no
choice but to mount a rescue. When his plans are thwarted at
every turn, Donald and Mary are thrown in a tumultuous a
race for their very lives. Though destiny brings them
together, Don must face the truth smoldering in the recesses
of his heart. Can he cast aside his ideals and declare his
love for the saucy Highland lass?