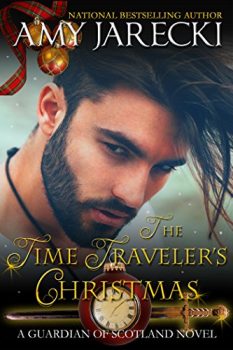 It’s not every day a man awakes on a fourteenth-century battlefield beside a woman fighting for her life.

A man’s life can fall apart in an instant…

Tougher than oxhide, Lachlan Wallace can take about anything except a breakup call from his wife two minutes before competing in the Karate Championship of the World. Arriving home with a loss, he agrees to watch his uncle’s cat over the holidays. Or so he thinks—until he awakes on a fourteenth century battlefield beside a woman fighting for her life.

Taken from her at the age of two, Lady Christina de Moray hasn’t seen her son in thirteen years. While traveling with Robert the Bruce’s army to exchange an English prisoner for the lad, a battle erupts. Losing the fight, Christina is rescued by a mysterious warrior while the English escape with her son yet again.

And never bet against the potency of passion…

Left with no way back to the twenty-first century, Lachlan agrees to help Christina rescue the lad from his English captors. If the heir is not returned by Christmas next, the Bruce will make his decision whom to grant the de Moray lands, including Lady Christina’s hand. Once his duty is fulfilled, Lachlan hopes to discover a way home—as long as he keeps his mind on the goal and ignores his growing love for the spirited woman who gives him her trust—and her heart.