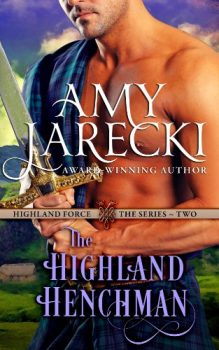 The Highland Henchman
by Amy Jarecki

Intent on winning a Lowlander’s tournament, Bran MacLeod travels south with his laird. All goes as planned, except spirited Miss Enya Ross continually distracts him, and in the oddest situations. With no business lusting after a baron’s daughter, Bran decides to return to Raasay… until his laird pledges Bran’s services in the fight to reinstate Mary, Queen of Scots to the throne.

Enya has no deference for the lines of nobility, or for the Great Divide that separates Lowlanders from Highlanders. The way Sir Bran’s eyes hunger for her ignites an internal fire Enya cannot quell. All her life she’s wanted adventure and excitement, but now her every thought is consumed with the rugged Highlander.

With all odds stacked against them, can their forbidden love withstand the tumult of war and the menace of betrayal?