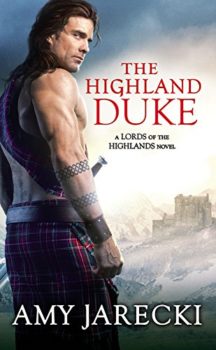 Lords of the Highlands Book 1

The Highland Duke
by Amy Jarecki

When Akira Ayres finds the brawny Scot with a musket ball in his thigh, the healer has no qualms about doing whatever it takes to save his life. Even if it means fleeing with him across the Highlands to tend to his wounds while English redcoats are closing in. Though Akira is as fierce and brave as any of her clansmen, even she’s intimidated by the fearsome, brutally handsome Highlander who refuses to reveal his name.

Yet she can never learn his true identity.

Geordie knows if Akira ever discovers he’s the Duke of Gordon, both her life and his will be forfeit in a heartbeat. The only way to keep the lass safe is to ensure she’s by his side day and night. But the longer he’s with her, the harder it becomes to think of letting her go. Despite all their differences, despite the danger—he will face death itself to make her his . . .