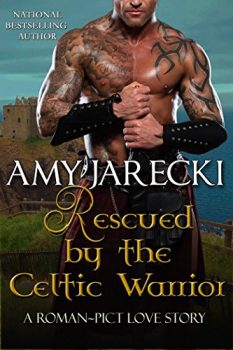 Rescued by the Celtic Warrior

Rescued by the Celtic Warrior
by Amy Jarecki

Ripped from her bed, she’s captured by savages. Terrified, she prays her betrothed will mount a rescue. But it is the enemy, a Pict with Celtic tattoos and hair of fire who wields his sword and fights for her freedom.

When she seeks refuge in the warrior’s stronghold, the Picts eye her with distrust and force her to earn her keep as a commoner. But the longer Valeria remains, the more agonizing it becomes to conceal her burning love for the Celtic warrior.