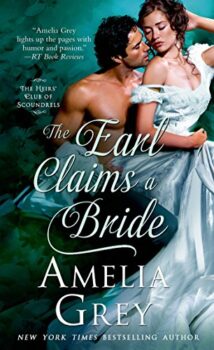 The Earl Claims A Bride

The Heirs' Club of Scoundrels Book 2

The Earl Claims A Bride
by Amelia Grey

Bestselling author Amelia Grey is back with a brand-new tale of daring, desire, and a delightfully scandalous bargain---one that might just lead to true romance.

CAN A HASTILY ARRANGED MATCH

Harrison Thornwick is the Heirs' Club's newest member. His carefree days as a reckless rogue are suddenly behind him after the tragic death of his brother leaves him in charge of the family estate. What's more, the Prince himself has offered to secure his marital prospects. Now Harrison has no choice but to grin and bear his noble fate---and the woman who's been chosen for him.

BECOME A LOVE FOR ALL TIME?

Miss Angelina Rule is a spectacular beauty, a dream match for any man. But she is fiercely independent---and full of passion---and is all set to rebel against her royal order of marriage...until she meets the devilishly charming Harrison. With him by her side, Angelina devises a scheme that will teach her meddlesome relatives a lesson, once and for all. But little did she and Harrison expect to fall into a tempestuous attraction---and a powerful desire that neither of them can deny...