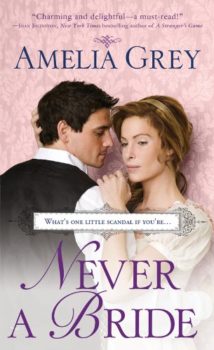 Never A Bride
by Amelia Grey

Searching all over Regency London for the killer of her best friend, Mirabella Whittingham has been kissing bachelors in hopes of finding him. She doesn't care what people say - her fiancé, a man she's never met, shows no signs of returning, and she's given up hope of ever becoming a bride. But she's shocked when one man's kiss makes her tremble with passion.