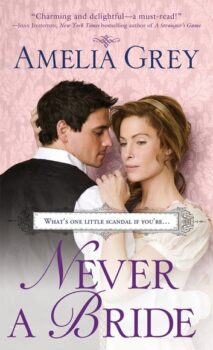 Never a Bride
by Amelia Grey

When he left for America six years ago, the handsome Viscount Stonehurst never suspected that he would return home to England to find his lovely fiancé embroiled in the scandal of the decade. The woman he planned on making his wife has been kissing every man in London . . . except him!

But scandal doesn't matter in search of the truth . . .

Engaged and then abandoned, Mirabella Wittingham is determined to find the man who drove her cousin to suicide, even if it means ruining her reputation and disgracing herself in the process . . .

When her plans go awry, Mirabella has no choice but to turn to her long-lost fiancé for help. But can she trust the man who deserted her so many years ago, or is he destined to fail her yet again?