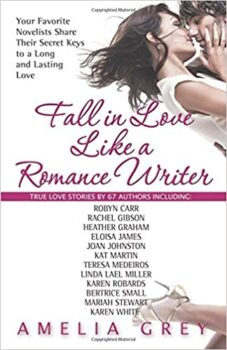 Fall in Love Like a Romance Writer
by Amelia Grey

Amelia Grey unveils the secrets to real romances from the masters of the fictional world.

This book goes beyond the fictional love stories to uncover the real romantic relationships of more than 60 beloved, bestselling romance novelists.

Readers will enjoy glimpsing into the exclusive and private world of their favorite romance authors. Humorous, poignant, and entertaining from beginning to end, Fall In Love Like a Romance Writer reveals what it takes to have your own happily ever after, just like the ones your beloved writers are creating...and living.