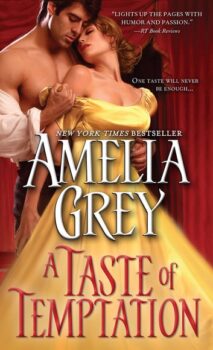 A Taste of Temptation

A Taste of Temptation
by Amelia Grey

She Came to Avoid a Scandal

Olivia Banning came to London to solve one mystery, and stumbled upon another quite by accident. Unfortunately her plans are disrupted when the notoriously rakish Earl of Dugdale catches her investigating---in his bedchamber.

And Ended Up the Talk of the Ton

Andrew Terwillger, the Earl of Dugdale, scoffs at Olivia's tales of things that go bump in the night, although her beauty and courage are tempting. When they're caught in a kiss, neither he nor she wants the marriage Society demands. But marry they must, despite their misgivings. And as soon as they say "I do," increasingly strange and mysterious things start to happen...

Can also be purchased in eBook format.