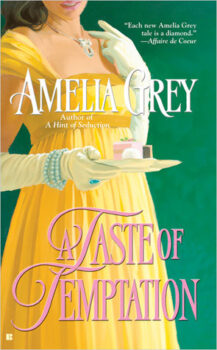 A Taste of Temptation

A Taste of Temptation
by Amelia Grey

A breach of etiquette

Andrew Terwillger may be London's most notorious rogue, but even he is shocked to find beautiful Olivia Banning snooping about his bedroom-claiming to be looking for a ghost, no less! Captivated by her audacity, he lets caution give way to temptation.

A question of honor

The moment their lips touch, they are discovered by a group of the ton's most respected matrons. Pressured to salvage her reputation through a proper wedding, Olivia and Andrew are brought unwillingly to the altar, each believing the worst of each other.

A spirit of passion

Andrew, however, finds it more and more difficult to ignore his charming wife, and Olivia longs for the affection of the husband she has come to love. But just as their forced marriage is becoming a true romance, a mysterious presence begins causing mischief in their home...