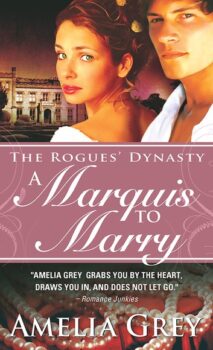 A Marquis to Marry

A Marquis to Marry
by Amelia Grey

Alexander Mitchell Raceworth, the dashing fourth Marquis of Raceworth, is shocked when the alluring young Duchess of Brookfield accuses him of stealing priceless pearls belonging to her family. Susannah Brookfield is the most beautiful, enchanting woman he has ever met, but despite his attraction, he's not about to hand over the pearls.

Though suspicion and mistrust drive them apart when the pearls are stolen, Race suggests they pool their resources to recover them. If they do find them, will they finally be able to give in to love, or will the truth of the elusive necklace tear them apart once and for all?