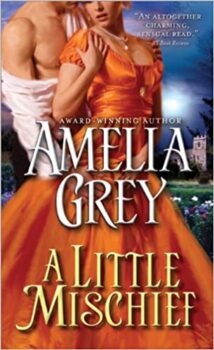 A Little Mischief
by Amelia Grey

Isabella Winslowe is gaining respectable notoriety for her 'Wallflower Society' until the unthinkable happens. She finds the darkly handsome Earl of Colebrooke's sister in the back garden with a stone cupid in her hand and a dead man at her feet. The newly titled earl is formidable in looks, personality, and reputation. He's not a man Isabella wants to tangle with over such a delicate situation.

Daniel Colebrooke, is juggling all that he can handle when the most alluring young lady he has ever met arrives at his door and tells him his sister never intended to kill London's most eligible bachelor. Daniel is certain he has a beautiful madwoman in front of him. Highly suspicious of Miss Winslowe's story, he goes with her to the garden and finds it empty. She insists someone has stolen the body.

Daniel decides to keep an eye on Miss Winslowe to see what kind of mischief is she up to?

But what Daniel finds is that Isabella sets his heart to racing like no woman ever has. She's engaging and exciting in a quiet and captivating way. But Daniel can't give into his desire for Isabella . . . there's a supposedly missing dead body standing them.