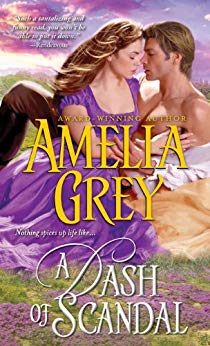 A Dash of Scandal

A Dash of Scandal
by Amelia Grey

Take...
Millicent Blair, a small-town girl suddenly thrust into the role of London Society's top gossip columnist.
Add...
Chandler Preswick, the Earl of Dunraven, who threatens to expose Millicent to his fellow aristocrats among the ton.
Stir in...
The mysterious Mad Ton Thief, who has stolen the Earl's family heirloom.