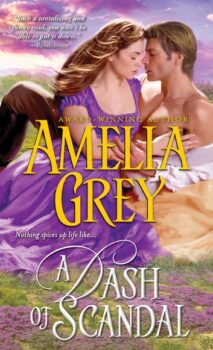 A Dash Of Scandal

A Dash Of Scandal
by Amelia Grey

Welcome to the sparkling Regency world of Amelia Grey, where the gossip is fresh and a new scandal is always brewing.

Enjoy the re-issue of Amelia Grey's

A DASH OF SCANDAL

IS SHE STEALING...
OR JUST HIDING IN DARK CORNERS...

The Earl of Dunraven is obsessed with catching the thief who stole a priceless heirloom from him. When he keeps running into London newcomer Millicent Blair in places she shouldn't be, his suspicions aren't the only thing aroused...

But Millicent's real secret is a far cry from what the earl thinks - - and would horrify him much more if he knew. Yet, every encounter increases the attraction between the powerful earl and the lovely, intelligent, and feisty Miss Blair...