Thread on Arrival
by Amanda Lee

Embroidery shop owner Marcy Singer gets hung up on a tapestry that may lead to sunken treasure and be the motive for murder....

When Marcy’s friend Reggie, Tallulah Falls’ local librarian, asks her to teach an embroidery class as therapy for domestic abuse victims, she gladly agrees. One of the women wants to flee from her abusive husband but is afraid to leave her elderly father-in-law behind. And she thinks Marcy can help.

The elderly gentleman shows Marcy a tapestry his grandmother made, which he believes reveals the location of pirate treasure off the Oregon coast. He’ll move to a shelter—provided Marcy takes the tapestry to keep it safe. But when the police arrive the next day to escort him out, they find the old man murdered and the house ransacked. Does someone want that treasured tapestry desperately enough to kill for it?

Other Books by Amanda Lee 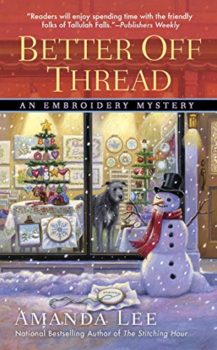 The Stitching Hour
An Embroidery Mystery #9

Cross-Stitch Before Dying
An Embroidery Mystery #6

Stitch Me Deadly
An Embroidery Mystery #2

The Quick and the Thread
An Embroidery Mystery #1