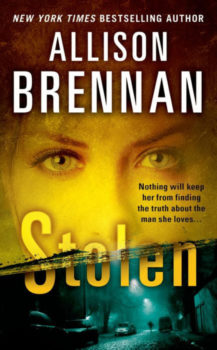 Sean Rogan risks his life when he goes undercover … but the last thing he expects is to put the woman he loves in danger.

LOVE THE ONE YOU’RE WITH

Nothing is more important to private investigator Sean Rogan than his relationship with FBI trainee Lucy Kincaid. But when his past catches up with him, Sean faces an ultimatum: clear his name and help the FBI take down a rogue agent, or go to prison and lose everything he holds dear. With only Agent Noah Armstrong as his back-up and forced to keep Lucy in the dark, Sean steps back into his old world. But the longer he’s undercover, the more dangerous the game becomes. More than Sean’s future with Lucy is at stake—so is his life.

Lucy can’t imagine Sean would keep secrets from her—until an FBI agent casts doubt about who he really is…and who he used to be. Why did Sean quit his job with his brother and move to New York? Why hasn’t he told her anything about his new job? With more questions than answers, Lucy doesn’t know who to believe or who she can trust. All she knows is that Sean is in grave danger, and this time, it’s personal.

NOTE: Was reissued June 2015 in mass market paperback by St. Martin’s Paperbacks at a special low price, but that edition is out of print.