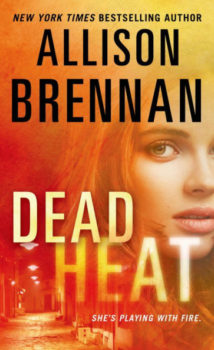 DEEP IN THE HEART OF TEXAS

Assigned to San Antonio’s Violent Crimes unit, Lucy Kincaid joins a team of seasoned veterans and newer agents for a task force called Operation Heatwave. It’s supposed to be a simple sweep of known offenders with outstanding warrants. But when Lucy and her team try to bust two local brothers for jumping bail, she walks into a hotbed of pure evil. Their names are George and Jaime Sanchez. They are charged with murder, drug trafficking, and worse. And one of them is still out there.

THE HEAT IS ON

As Lucy races to capture Jaime Sanchez, more shocking evidence comes to light. The brothers have been using their basement as a holding cell for children they kidnapped for the cartels. When George agrees to turn on his brother, he is murdered behind bars. Now Lucy has no choice but to go outside the law. Enlisting the help of her boyfriend Sean Rogan and his mercenary brother Kane, she will risk her career—and both of their lives—to bring down a crime lord’s empire…before more innocent lives go up in flames.

NOTE: Was reissued June 2015 in mass market paperback by St. Martin’s Paperbacks at a special low price, but that edition is out of print.