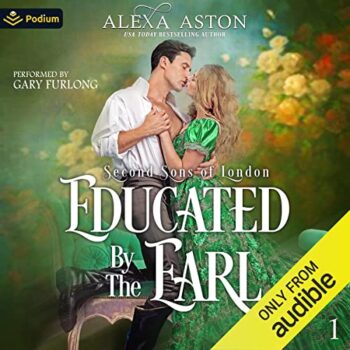 Educated by the Earl

Educated by the Earl
by Alexa Aston

First sons inherit all. Third sons are promised to the church. Second sons do their duty and serve in the military---unless fate intervenes and turns their lives upside down.

Welcome to Second Sons of London, a new Regency Historical Romance series by USA Today Bestselling author Alexa Aston, where seven men who are second sons lay claim to fabulous wealth and lofty titles and fulfill their destinies when they find their soulmates.

A dutiful army officer who shuns intimacy. A selfless beauty ready to start living for herself. A chance meeting in the street that leads to love . . .

When Major Spencer Haddock's father dies, he returns to England as the Earl of Middlefield. He seeks a typical ton marriage, where his wife will provide him with an heir and possibly other children and then they go their separate ways. He intends to find his countess quickly and not waste time at boring social affairs.

Lady Tessa Foster delays her come-out for several years in order to care for her ill parents. Now out of mourning, Tessa is eager to be introduced in Polite Society so she can find a husband and start a family of her own.

When Spence attempts to save Tessa from a thief brandishing a knife, she turns and attacks Spence. He quickly learns that instead of the pliant woman he thought he wanted as his countess, he desires Tessa---a woman of beauty and valor who stands up for herself and those she cherishes.

Can Spence change Tessa's poor opinion of him and win the heart of the woman he has come to love?

Find the answer in bestselling author Alexa Aston's Educated by the Earl, the first book in Second Sons of London.