We live in dark times. Every time we turn on the news or get on social media, we are bombarded by some other horrendous news story or tragedy. While I was writing Echoes from the Veil, I struggled to find time and space to breathe. My mind became so cluttered with current events, that some days even writing a few words felt like a struggle.

For me, the turning point came while watching Beyoncé perform in the Netflix special Homecoming. Beyond Beyoncé’s incredible singing and dancing, my favorite part was watching the “behind-the scenes” moments in the show, revealing her incredible commitment to her craft. She gathered a staggering ensemble of dancers, singers, and musicians to pull off this breathtaking and inspiring concert. I became so inspired watching her rehearsals, the ways in which she pushed herself and her team creatively to such beautiful excellence. She’s Beyoncé! After she had her twins, she could have sat back with Jay-Z and her family in the Turks and Caicos in a multi-million dollar mansion and relaxed by the beach, but she pushed herself to be the absolute best. Rehearsal after rehearsal, she sweated, fine-tuned, critiqued, and received critique–all for the sake of her art.

As I was writing my book and as the news stories continued to grow worse every day, my father would remind me: “stay in your lane.” It seemed like such a selfish thing to turn a blind-eye on the suffering in the world, but after watching Homecoming, I realized that it’s not about ignoring these horrible things. Staying in your lane is really about accepting the things you cannot control and powering through toward your goals. Being miserable about current events wasn’t helping anyone, and it certainly wasn’t helping to make the world a better place. After watching Beyoncé at her absolute best, I made the resolution the next day to get back to work on Echoes from the Veil. I may not be able to change the world, but I can write the best novel I can and maybe, perhaps, inspire others to do the same in their own work–in whatever lane they find themselves.

Echoes from the Veil is a paranormal romance filled with adventure and Irish mythology, but beyond that, it’s a story about a woman finding her own power and strength. In many ways, it’s about finding my own strength in a world that can often feel chaotic and unstable. When it all feels a bit too overwhelming, I remind myself that I still have control over these words, these sentences, and these stories. It always helps to ask myself: what would Beyoncé do? 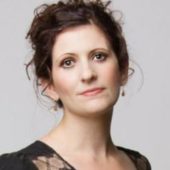 As a child, Colleen Halverson used to play in the woods imagining worlds and telling stories to herself. Growing up on military bases, she found solace in her local library and later decided to make a living sharing the wonders of literature to poor, unsuspecting college freshmen. After backpacking through Ireland and singing in a traditional Irish music band, she earned a PhD in English with a specialization in Irish literature. When she's not making up stories or teaching, she can be found hiking the rolling hills of the Driftless area of Wisconsin with her husband and two children. She also writes as C.B. Halverson.

One thought on “Being Creative in Dark Times”