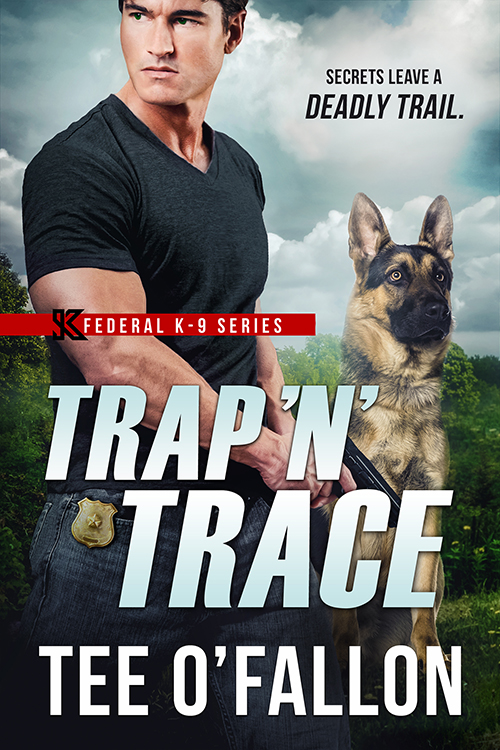 The Crime. Trap ’N’ Trace is based on an actual crime that took place somewhere in the U.S. in some decade. No spoilers here, so that’s all you get for now. The only hint I’ll give is that the perpetrator(s) stumped and eluded law enforcement for years.

The Setting. What I liked most about this story is that it’s set on my home turf. Katrina’s castle home really exists, and I used to play in it as a child with one of my friends. It’s gone through a multi-million-dollar renovation since then, and I’ve tried to describe it as accurately as possible.

The Characters. I’m not sure which was more fun to write about, the human characters or the canine characters. FBI Special Agent Dayne Andrews is a tough guy who grew up on the streets of Newark, New Jersey. If any of you have had the pleasure, Newark has a lot of great things to offer, but is also known for its crime and violence. While still a kid, Dayne learned how to break into anything and steal whatever he needed to survive. Ironically, troubles he encountered in his teens inadvertently led him down the rosy path to Quantico. But Dayne’s never forgotten where he came from. In fact, his past is about to come back and bite him in the a$$.

Like it or not, Dayne and his German shepherd K-9, Remy, are roped into a homicide investigation, at the center of which is Katrina Vandenburg. Kat is the last woman he should want and the only one he does. She’s everything he’s not, and being around her only rams home their differences that much more. While he grew up dumpster diving for food, she was being served meals on fine china and crystal. That doesn’t mean rich girls don’t have problems, too.

Despite her net worth, Kat grew up in a loving home with parents that instilled good old-fashioned family values. One of the first lessons learned was that with great wealth comes immense responsibility. That kind of power must be wielded wisely and with care. On the personal side, Kat’s never quite certain whether her friends and boyfriends actually care about her or her net worth. Marrying for love seems like a naïve, farfetched idea. Until the moment Dayne Andrew enters the picture. He’s nothing like the refined men in her circles. He’s rough, tough, and hotter than hell.

And let’s not forget the canine characters. Remy is Dayne’s faithful German shepherd K-9. Remy is the one of the best trackers around. Then there’s Angus, the nine-week-old Golden retriever puppy that steals the show. For all you dog lovers out there, there’s a double dose of “dog” in this story.

Here’s an excerpt to whet your appetite:

Dayne manipulated her arm and shoulder in different directions then abruptly dropped his hands and took an awkward step back. “I don’t think anything’s broken, but the only way to confirm that is with X-rays. Did you take anything for the pain?”

“I can see why.” He dipped his head to the ugly bruise that had pretty much doubled in size in the last hour. “Do you have an ice pack?”

“In the freezer.” She nodded to the stainless steel Thermidor against the far wall. “Emily and I keep several in there in case we pull something during kickboxing.”

He practically bolted to the freezer then jerked open the door with what seemed like more force than necessary. The ice packs were staring him in the face on one of the shelves, but he didn’t grab one right away. He stood there with his broad back to her, his entire body frozen like a block of ice.

A long moment passed before he grabbed one of the packs then shut the freezer door. He held the pack out to her, maintaining so much distance between them it was obviously intentional. “Hold this to your shoulder for twenty minutes, three times a day for the next forty-eight hours.”

“Thank you.” She took the ice pack, taking extra care not to touch his hand. What was that about? One minute they’d been getting along fine—not that she cared, not really, anyway—the next, he acted as if she had the cooties.

She pressed the ice pack against the bruise, flinching as it made contact. “I told Detective Paulson I’ll be hiring a security guard company first thing in the morning. That way, neither the police department nor the FBI will have to shoulder the burden of my safety.”

His brows met. “Your safety is not a burden.”

“Then why do you look physically ill?”

“Do I?” He shoved one hand in his pocket, making his biceps bunch.

“I’m not.” A muscle in his cheek ticked. “And, I’m not going anywhere. I don’t believe in coincidence, and you shouldn’t, either. In case it’s escaped your attention, there’s a connection between the two victims.”

“Okay, I’ll bite.” She crossed her arms, inadvertently plumping her breasts against the lacy cups of her nightie then quickly uncrossing them. “What’s the connection?”

“You,” he said softly. “You were at both locations. So, like it or not, you now have round-the-clock protection, and I’m not talking about some rent-a-cop agency.”

She advanced on him until she was a foot away. “Then what are you talking about?”

“Me.” He pushed from the counter, closing the gap to a few inches. “Until this investigation is over, you don’t go anywhere without me glued to your six.”

She snorted. “Is that alpha male jargon for glued to my ass?”

“It means you’re stuck with me, twenty-four seven.”

It took another few seconds for the full meaning of his intentions to take root. “No.” She shook her head. “That’s not happening.” Not with him, anyway. One night was fine but having him around all the time would drive her—and her body—crazy.

One thought on “Behind the Scenes of Trap ’N’ Trace, a Federal K-9 Novel”