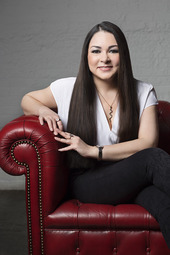 Sylvia Day is the national bestselling, award-winning author of over a dozen novels written across multiple sub-genres — contemporary, fantasy, historical, futuristic, science fiction, romantic suspense, paranormal romance, and urban fantasy — under multiple pen names: three! A wife and mother of two, she is a former Russian linguist for the U.S. Army Military Intelligence.

Sylvia is a lifelong California resident who loves to travel. Her adventures have taken her to Japan, Holland, Germany, France, Mexico, Jamaica, and all over the United States. Born in Los Angeles, she grew up in Orange County (the O.C.), and later lived in Monterey, Oceanside, and the Temecula Valley.

She is a Japanese-American who enjoys the many Japanese cultural events in Southern California as well as frequent family jaunts to Disneyland, Knott's Berry Farm, and Sea World. Her childhood career aspirations were few — become a dolphin trainer at Sea World or a bestselling novelist. Obviously, the dolphin trainer career took a back seat.

A year after she first sat down at the keyboard, Sylvia sold her first book to Kensington Brava and three years later—to the day—she sold her 15-17th single title books. In addition to her novels, she's written numerous novellas and short stories for both print and electronic-original release. Called "wonderful and passionate" by WNBC.com and "wickedly entertaining" by Booklist, Sylvia's stories are frequent recipients of Readers' Choice and Reviewers' Choice accolades. Her work has been translated into Russian, Japanese, Portuguese, and Spanish. She's been honored with the Romantic Times Reviewers' Choice award, the EPPIE award, and multiple finalist nods for Romance Writers of America's prestigious RITA Award of Excellence.

A voracious reader, Sylvia still manages to keep up with her two young children. She's blessed with an understanding husband who is proud of her writing and doesn't mind (too much) that her computer sees her more often than he does.