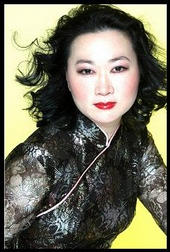 A family practice physician and graduate of Vassar College, I stumbled into writing late in life. Longer in coming, but fast when it finally came. Within a 3 month period, I went from being unpublished to having an amazing 2-book deal with Berkley, 2 novellas with Kensington's new erotica line, and a 3rd novella in the Berkley/Jove anthology, OVER THE MOON, headlined by MaryJanice Davidson and Angela Knight.

Aspiring and inspired—I was an avid fan of Kensington's sensuous Brava line—I dashed off a 25,000-word novella in 2 weeks, and drove 3-1/2 hours to Boston to give my pitch. The novella pitch turned into a home-run sale one month later, which led to getting a fabulous agent, which quickly led to getting my fabulous deals. What an amazing ride that was.

And yet, really, I'd had plenty of practice before this . . . on others. Just not myself. For the last five years prior to picking up that pen, I was, in fact, a full-time developer of talent. My young son appeared on Sesame Street, and in a Fuji TV commercial and print ad. My daughter was the Little Miss Hudson Valley Beauty Queen.

My husband, Da Chen, came to America from China at the age of 23. With my editorial help and a good agent, Da's first memoir was auctioned off for $400,000 (North American hardcover rights) to Ann Godoff, the former president, publisher and editor-in-chief of Random House (Little Random). His young adult fantasy, WANDERING WARRIOR, was optioned by Warner Brothers, and his other young adult non-fiction was a Borders Original Voice finalist.

Alas, with such promising results, and with the entirety of my family leaving me behind in the dust, I finally decided it was long past due to develop my own talents, or rather, to see if I had any. Especially after my son listed mommy's main achievement as: She drives really well. Developing myself led to prancing onto the community theatre stage for the very first time in my life, singing, acting, and dancing—can you imagine!—as Bloody Mary in South Pacific alongside my children and saying such juicy lines as: You damn sexy man! From stage mom to mom-on-stage . . . way cooler. Even more fun was appearing, again with my children, as an extra on Saturday Night Live. But most exhilarating and surprising of all is the joy I have discovered in writing romances, a newfound passion that promises to become a life-long love affair.