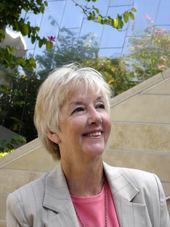 Rhys Bowen’s mysteries have been nominated for every major mystery award, including the Edgar for best novel, and she has won nine of them. She currently writes the Molly Murphy Mysteries, set in turn-of-the-century New York City and featuring a feisty Irish immigrant woman. In 1997 she began a new, lighter series, this one about a minor royal in 1930s England. The first book was called Her Royal Spyness. It has been described as Bridget Jones meets Charade as told by Nancy Mitford and described in a Booklist starred review as "A smashing romp." The first book has appeared on many bestseller lists and award nomination slates, including the Dilys award for the book that independent booksellers most enjoyed selling. A Royal Pain and Royal Flush are now in stores and Royal Blood comes out this fall.

Rhys was born in Bath, England, of a Welsh/English family, and educated at London University. She worked for the BBC in London, as an announcer then drama studio manager. She sang in folk clubs with luminaries like Simon and Garfunkel and Al Stewart, and also started writing her own radio and TV plays. Needing to escape from the dreary London weather, she accepted an invitation to work for Australian Broadcasting in Sydney. While Down Under she met her future husband John, who was on his way to California. She married and settled in the San Francisco area, where she has lived ever since, raising four children. (Although she now spends her winters in her condo in Arizona.)

Finding nothing like the BBC in California, Rhys started writing children’s books. Her first picture book was named a NY Times best book of the year. More picture books followed, then Rhys moved to young adult novels, writing many best selling titles. She also wrote some adult historical sagas and some TV tie-ins. When she felt she had exhausted her enthusiasm for writing for teenagers, Rhys decided to write what she likes to read: mysteries with a great feel for time and place. Her childhood memories of her Welsh relatives were the inspiration for her first mystery series: the Constable Evans novels. The stories were immediately well received. The second book, Evan Help Us, was called "a jewel of a story" by Publishers Weekly and nominated for a Barry Award. Evan’s Gate received an Edgar Best Novel nomination.

Wanting to try her hand at something different and edgier, Rhys conceived Molly Murphy—brash, fearless Irish immigrant in New York City. The first book in this series, Murphy’s Law, won three awards including the Agatha. Every subsequent book has received starred reviews and award nominations. For the Love of Mike won the Anthony Award at the world mystery convention. Oh Danny Boy won a Macavity. The ninth book, The Last Illusion, will be published in March 2011.

Rhys also enjoys writing short stories and has achieved much critical acclaim for them. Doppelganger won the Anthony award and was included in the world’s finest mystery and crime stories anthology. More recently her story Voodoo was chosen to be part of the anthology of the best of 50 years of Alfred Hitchcock Mystery Magazine.

Rhys is a past national board member of Mystery Writers of America. When not writing she loves to travel, sing, hike, play her Celtic harp, and entertain her grandchildren. She blogs at Jungle Red Writers and Rhys’s Pieces.