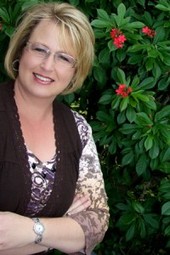 It's hard for me to imagine that I've been writing romances for over twenty years now! I started at the young age of 21, just after I got married. Reading romances, and then writing them, came about as a result of having too much time on my hands. When I first married my husband Don, I was working a regular nine to five job and he worked swing shift, from four in the afternoon until midnight. It wasn't an ideal schedule for newlyweds, and in order to pass those hours when I was alone I started reading romances, and eventually tried my hand at writing them.

The road to publication wasn't an easy one. It took me five years and dozens of rejections to make my first sale, which was to Harlequin for their "Stolen Moments" line. THE FAMILY MAN, written under the pseudonym Danielle Kelly, was one of the twelve novellas published in 1993 for this promotional line.

It took me another two and a half years (and more rejections!) to sell my second book. HEAVEN'S GIFT (written under my own name) was published in October 1995 by Leisure Love Spell for their "An Angel's Touch" series. Another two years passed of collecting even more rejections before I finally sold to Harlequin Romance and Harlequin Temptation. At the time, writing for both Temptation and Harlequin Romance provided me with a wonderful creative outlet for both my modern, ultra-sexy stories, and my warmer, traditional romances. But as the years passed, I realized how much I enjoyed writing the sexier stories and streamlined my career accordingly so that I was no longer writing the sweet traditional romances, and instead focused on the hotter, sexier stories for Temptation and Blaze.

After writing over two dozen books for Harlequin, I decided to branch out. I wanted to write anthologies and single titles, and came up with an idea about three sexy brothers with the last name of "Wilde." Little did I know that those Wilde brothers would become such a sensation with readers. In the second Wilde book, WILDE THING, four Wilde cousins were introduced, and readers started writing in for their stories, too. It's been a joy and pleasure to write each of the Wilde stories, and I want to thank everyone for purchasing those books and putting them on the USA Today Bestseller list!

I've been a full-time writer for years, which consists of being deep in deadlines, writing proposals (growling at the husband to fix a glitch in the computer so I can get back to work!), perusing contracts, line-edits (stressing over a scene that won't work or characters that just won't talk or cooperate with my plans for them!), galleys, art-fact sheets, promotion, and other publishing paperwork. Admittedly, I wouldn't trade all the craziness in for pantyhose, rush hour traffic, and a nine-to-five job again. Writing is hard work, but I find the rewards are well worth the effort. Fan letters are one of those priceless rewards, and can keep me on a high for days! I've met the most wonderful people through my books, some of which I now consider good friends.