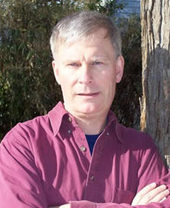 I was born April 30, 1949, in Shelby, Montana, a tough oil field, railroad and farming town clinging to the prairie 60 miles East of the Rocky Mountains, a half hour drive south of Canada, and a million miles from everywhere else. For most of my youth, my father managed movie theaters and my mother was a county librarian. I was a bookish, movie-going kid who survived playing high school football.

I went to public schools and worked: I was a grave digger, farm tractor jockey, rock picker, hay bucker, janitor, motion picture projectionist, and city road crew laborer — all before I graduated from the University of Montana with a degree in journalism.

Writing captured me early: I dictated stories to my mother when I was 5, and wrote my high school Senior Class play. I collected enough rejection slips from magazines for my short stories and poems to build a fire.

In 1971, I lucked into a job as a staff aide for the Constitutional Convention that rewrote Montana’s core document. I subsequently worked as a juvenile delinquency analyst before leaving “the real world” to write fiction, a career move that scared the Hell out of everyone but me. At 24, while living in a converted garage in Missoula, I sold SIX DAYS OF THE CONDOR. That same summer, I won a Fellowship to spend a year on the great Sen. Lee Metcalf (D-Mont.)’s staff in Washington, where I knew I would witness the impeachment of Richard Nixon.

Nixon left D.C., I stayed, seizing an opportunity to work as an investigative reporter for syndicated columnist Jack Anderson for a little more than four years. I covered politics, crime, drug trafficking, espionage...any story I could get. I left Jack’s employment to concentrate on my fiction and movie work.

Work which luckily led me to my amazing wife, Bonnie Goldstein, who’s been a private detective, Senate aide, network TV producer, and a writer. We have two children: Rachel, an Academy Award nominated documentary filmmaker, and Nathan, a college student in San Francisco. My sister Jane is a Chicago health care executive. My current home is a quiet suburb of Washington, D.C. I've been lucky enough to be an American Edgar nominee, while France awarded me the Grand Prix Du Roman Noir (2001) and Italy gave me the Raymond Chandler award (2003). That year, I also was honored to receive an Outstanding Alumni Award from the University of Montana (Missoula). My novel MAD DOGS received Japan's Baka-Misu literary award in 2008.

Unless I’m working on a Hollywood project, I work out of our house, study T’ai-chi, swim, listen to progressive rock ‘n’ roll, read, go to movies, and do my best to obey the voices screaming inside me to write their stories.