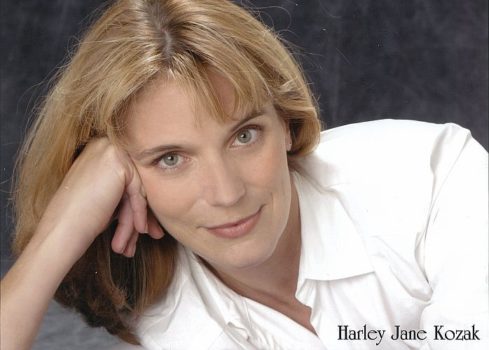 Harley is the youngest of eight children born to Joseph and Dorothy Kozak, an attorney and a music teacher, respectively, in Wilkes-Barre, Pa. When Joe died a year after her birth, Dorothy packed up the children and moved first to North Dakota and then to Nebraska, to teach at the University in Lincoln.

Harley’s first stage appearance was at age five in a college opera production of Dido and Aneas. In the fourth grade, she broke gender barriers playing the title character in Benjamin Franklin, and the following year discovered the joys of nepotism, performing on the educational TV show, Music With Mrs. Kozak.

In high school she was tap dancing with the Nebraska Repertory Theater, and the summer after her senior year, supported herself full-time with a whopping $55-a-week paycheck earned playing Indian Maiden #2 in The Legend of Daniel Boone in Harrodsburg, Kentucky.

With thirty-some plays to her credit, Harley at age 19 headed for the Big Apple and into the professional acting program at NYU’s School of the Arts (now Tisch School of the Arts). After completing the program, she was cast in the feature film The House on Sorority Row. This enabled her to retire her waitress shoes.

Then came a trio of principle roles in soaps—Texas, Guiding Light and Santa Barbara—that came to a smashing halt when Harley’s final character (a nun) was crushed to death by the giant neon letter “C.” But that “C” gig had gotten her to L.A., where she went on to star in feature films and prime time television programs. Ten years later she began to write novels, have babies and acquire dogs, cats, fish, and rabbits—and the rest, as they say, is history.

Harley currently lives with her family in Southern California, where she’s working on a piece of literary fiction, which is to say, a novel without a dead body. Meanwhile, she’s added teaching, blogging and public speaking to her resumé, exploiting her checkered past.