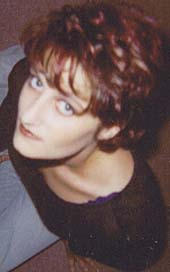 Cass Andre has been writing seriously since late 1996 when her first book came to life...and died shortly thereafter.

Her next three novels met the same sad fate. Three critique partners and two years later, Andre sold her first two books, Winters' Desire and Veiled Hearts to Hard Shell Word Factory. Andre's third book, a time travel romance called Deja Vu, will be available from Hard Shell in 2003. Her fourth novel, Remembering You is now available from Wings ePress. This is one novel you don't want to miss! And--for a limited time, Shrouded Hearts (the sequel to Veiled Hearts) is being distributed around the web for absolutely free.

Aside from raising four young children, Andre divides her time between penning her next novel, promoting her current releases and running her home-based company, Grand Designs. She and her husband currently live in Arizona where she's working toward the long awaited THE END on her fourteenth book.

Keep an eye out for her first horror novel, El Chupacabra coming May 2003 from Amber Quill Press.